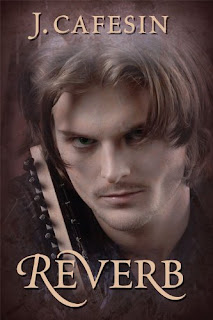 Blurb from Goodreads
James Michael Whren is brilliant, beautiful, wealthy, and taken-with himself, or more precisely, his genius for creating music. The object of desire for many, James's greatest passion is for his muse. But on the evening after his brother's funeral, his father turns his life upside down, and James is left abandoned in hell with no one to save him. James finally escapes, and on his run for freedom he's forced to confront the man he was as he seeks asylum from old friends and ex-lovers. Humbled and almost defeated, he finds refuge on a small Greek island. But with solitude comes madness. Then James meets Elisabeth. Reverb is a story of redemption, and follows one man's extraordinary journey of emotional growth through his discovery of his capacity to love.

First off, I have to say this isn’t my usual genre but the music element intrigued me so I decided to read it. The book wasn’t what I expected. Once you get past the slow moving plot, you find an emotional tale about a man’s obsession and the roads he has to travel to find himself again. He meets Elisabeth and her son Cameron on a small Greek island and slowly moves closer to that goal. This was an emotional read and I really enjoyed reading it. Jeri weaves a gripping emotional roller coaster ride.
I give this book 4 fairy rating as I didn’t get into it as much as I thought I would but it was a good read nonetheless.