I’m pleased to introduce Áine Massie to my little place on the web. She is author of Blood’s Voice and the forthcoming Blood Bound. It was an honor to share her insights with you the reader. She is having a giveaway of her books in conjunction with her official blog tour.GIVEAWAY ENDED 10/31/11 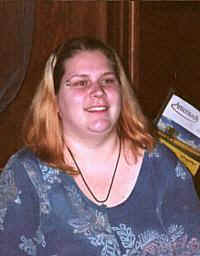 Áine P Massie is originally from Florida, she now lives in Wisconsin where she works on her House Millar series full time while raising four children (the term herding cats comes to mind). Her major in College was Childhood Education (0-5) with a minor study in Deaf Culture/ASL. She is also a Wiccan priestess dedicated to the gods, family, and love.
A life-long reader, Áine has always had a particular fascination with vampires, mythology, and the unusual. When she can escape from her children and books, she enjoys .. oh yes, reading, playing, ritual, a good cappuccino, and working with her healing stones.
Her first published work came in high school where she was part of a writing and drama group. But, she’s been reading the likes of Shakespeare and Poe since late elementary school and enjoys most forms of fiction. Blood’s Voice has been a long time in coming and with its publication (June 2011) Áine embarked on a new chapter in her life.