I'm welcoming Nicholas Olivo to my blog today for a guest post about scenes tagged with the word "Meanwhile.." Keep stopping back this week. I will have an interview, giveaway and review of his book "Imperium" 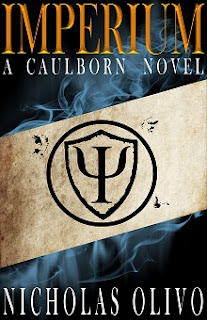 In comic books and video games, you’ll often find scenes tagged with the word “Meanwhile...” which shows the reader some bit of information that the protagonist doesn’t know about. Often times “Meanwhile” frames will show the villain laying a trap for the hero. This builds tension so that when the hero goes into the trapped room, we hold our breath to see if he’ll make it out okay.
I used a similar device when I wrote IMPERIUM. One of the challenges to writing in first person perspective is that you only get one point of view to work with, and sometimes that’s just not enough. I wanted to avoid the awkward bits of exposition where two characters discuss something they both already know about, just so the reader can learn about the world. I chose to insert coded communications sent between my antagonists at the start of each chapter. This let me do two things. For starters, it gave me a chance to do some world building, as in the transmission below.
Begin Coded Transmission
There are three organizations you need to be wary of in Boston. The Strangers, who ensure prophecies come to bear; the Chroniclers, who monitor the time stream; and the Caulborn, who protect the citizens from paranormal and supernatural threats. Of these, the Caulborn will be the most troublesome. They will fight you every step of the way if they discover your intentions. Their agents are gifted with a myriad of supernatural talents; fae familiars, magical weapons, and, in one case, deity-like powers. Extreme caution should be exercised when dealing with them.
-NS
End Coded Transmission

These also let me give some back story -
Begin Coded Transmission
Because of his partially divine heritage, Vincent Corinthos is codenamed the Godling in most Caulborn documentation. Born with a caul, Vincent was marked as a potential agent from very early on. Any traits he may have inherited from his father are classified and will require additional work to obtain.
Galahad XI recruited Corinthos specifically to work with an Urisk named Lotholio. The particulars of why Galahad chose Corinthos for this task are unknown. What is known is that Lotholio had crossed from the Bright Side thirty years earlier and had been across the country and back again, seeking aid for his people from America’s supernatural community. He had apparently given up and was about to return to the Bright Side when he was discovered by Caulborn agents in Massachusetts. This encounter would be the first step toward Corinthos’ ascension as a deity on the Bright Side.
-NS
End Coded Transmission

Finally, as in the comic book “Meanwhile...” panels, they me build tension in the book.
While it may be unorthodox, I suggest that a portion of the Urisk population be killed by envikan to reduce Corinthos’ overall powers, defeat him, and thus make conquest possible. The Urisk population can then be replenished via breeding programs.
-NS
End Coded Transmission
Lots of writers use this approach- Brandon Sanderson does it in the Mistborn Trilogy and in the Way of Kings. Christopher Farnsworth does it in his President’s Vampire series. It’s a great way to give your readers just enough of an understanding of what’s going on in the world, and lets you create those “Oh God, don’t open that door!” sort of moments that really let people get vested in your characters.

If you’d like to learn more about my world, swing by www.nicholasolivo.com. Thanks for having me on your blog, Heather!
Posted by Unknown at 9:15 PM