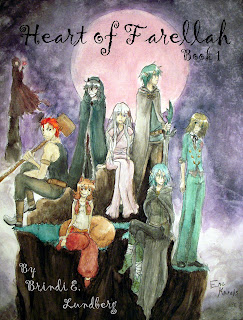 BLURB FROM GOODREADS:
Aura Telmacha Rosh is a lower-than-average songstress-in-training intent on making it through her coming-of-age ceremony with as little attention on her as possible. With abnormal, silver hair that shines like starlight and immediately draws people to her, she should be used to it by now, but even so, she's never been one for such embarrassing notions.

The night of the Rite comes. Aura's nerves are a mess, but so far she's performed perfectly. Things seem to be going surprisingly well . . . until she's kidnapped by Elves. At first, she can't believe it. Real elves? She'd always known Elves existed, of course, but never had one entered her secluded home-village of Farellah since the days of her great-grandmother. What could they possibly want with someone like her?

The answer turns out to be far more troubling than she could have imagined. Her kidnappers are convinced that she's the “Heart of Havoc”, a maiden of disaster prophesied to unleash a song of destruction that will destroy the world. Aura knows she isn't the wrathful destructress her captors claim her to be, but there's seemingly no way to convince them. Thus, Aura suddenly finds herself whisked into a journey across the Westerlands, where a corrupt empire known as Druelca seeks to use her power for evil, an unlikely array of warriors form her protective guard, and a mossy-haired Elf she's mysteriously drawn to might be the love of her life, her greatest weakness, or both.

Whether she chooses to accept her fate or escape it, getting over her stage-fright might help
I couldn't help but be pulled into this wonderful high fantasy and into the world of Farellah. This is a fairly long read, over 600 pages, but the story just flew from the pages and I ended up reading it in less than a week. In a land called Farellah, we meet Aura, a budding songstress who is about to be given her “song”. She isn't all that excited just nervous but is resigned to her duty. As she is about to go into her Rite of Discovery, she is taken captive by a pair of elves, Nyte and Rend, whom are entrusted with the task of taking her to their Elders to find out if she holds the song of Destruction as their prophecy states. Their journey is interrupted by members of a secret society who thinks Aura holds the Song of Salvation. Aura feels like she is normal and average but finds she isn't that at all and ends up questioning who she really is.
As their journey continues they are followed by an evil group of people called Druelca who also want to fulfill the prophecy. She finds out they have captured her twin sister Illuma and sets out to save her and the world.
This is a classic tale of good versus evil with a motley band of travelers who journey together and whom each has their own story. It also has some twists and turns that you don't expect.
I give this stunning masterpiece 5 fairies for grabbing me out of my chair and taking me for a whimsical journey of one's self discovery and the self doubts you have when you find out you aren't so normal after all. It also encourages you to accept yourself no matter who you are.
I would recommend this book for high fantasy lovers who enjoy a twist of romance. The book is 600+ pages but it keeps you turning the pages for more. Looking forward to the second book.