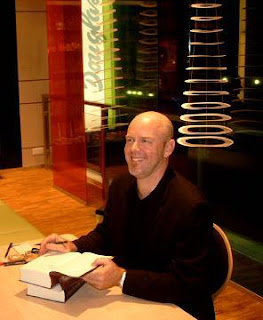 Hello all my followers, new and old, today I’m pleased to welcome best-selling fantasy author Tad Williams, author of numerous epic fantasies and also the young adult book entitled Dragons of Ordinary Farm.  His book Caliban’s Hour has been released in digital format and gives a different take on Caliban from Shakespeare’s,  “The Tempest”. It is told from Caliban’s perspective and forms into a tormented story about love, hate and revenge. Stay tuned tomorrow for my review of Caliban.
Let's begin with the question that always enters my mind when I read your books.

What/who inspired you to become a writer?
I don't think any one thing inspired me. I was always a reader, and always a storyteller. I liked to make things and to perform for people. Writing initially lured me because it was something I could do on my own, in my own time, without having to worry about synching ideas and schedules with collaborators. Only later on did I realize it was probably the perfect occupation for me.
Do you have a favorite genre of book that you like to read/write? If so, why??
I like the fantastical because that's what I grew up loving. I love the freedom. I like the way I can write about ideas and play with reality. And I like genre fiction because it forces me to constrain those ideas into a story that holds peoples' interest even if the idea itself doesn't immediately move them.
What helping aids do you use to focus when you write? Music?? Nature???
I use music sometimes to help me think, but mainly because I can block out external noise. I listen to things without words (especially ambient music) because I don't want the music to inspire me, I want it to isolate me. For me, writing is less about pounding keys and more about the thinking that happens first.

What character(s) of your book(s) do you relate to the most??
I always can relate to your female characters. My favorite is Briony of the Shadowmarch series and Renie of Otherland. Both have spunk and I like that.
Renie and Josua are both like me in many ways -- a (perhaps exaggerated) sense of responsibility, a desire to do the right thing, occasionally being hamstrung by the fear of doing something wrong or unfair. Briony has a lot of me in her, too, but I'm so much older and more experienced now she's kind of like Simon was when I wrote him -- a very distant, earlier slice of myself. But all of my characters, even the scariest and cruellest, have at least a little of me in them, although often tremendously exaggerated. That's how I find the emotional truth.
What words of wisdom would you like to share with aspiring writers like myself?
Don't just read the kind of books you want to read -- in fact, weight your reading to non-fiction, especially history and science. Learn lots of things. If you're going to create worlds, it helps to know how the one we've been able to study works. Also, try to finish things. Most new writers tend to grind the same stuff over and over, trying to make it perfect. You're missing all the other important lessons of pacing and finishing a story. And last, make writing a regular thing. Doesn't matter how often as long as you know you're going to be writing regularly and can think about what you're going to do when you sit down.
How do you visualize your stories?? In pictures?? Conversations? Dreams?
My work is a cloud of possibility -- kind of quantum, really. I keep all the possibilities in my head as best I can, and as I choose which ones I want to use they start to solidify. Only then do I start thinking about how the characters and situations would really look, feel, smell, sound. By the time I'm writing them down, making them real is the goal, but before that it all has to do with choosing among ramifying possibilities to make the best story.
What are your writing goals for the next 5 years??
I'd love to get into a regular rhythm where I'm doing at least one book every year, with some time left over for other projects. Because I've been writing such long stories I've often felt I was stealing time from my novels to do other kinds of writing. I'd like that division to be...formalized, for lack of a better word.

How long did it take you to write Shadowmarch and Otherland series?? What/who inspired these books??
I think OTHERLAND took about five years. I started it in England and finished it in America, so it's a bit hard to tell exactly. It was inspired in part by the Fairyland Boat Ride in Disneyland, and my fascination with small, compartmentalized things when I was younger. (Also by my days at Apple Computer getting interested in multimedia and the future of the internet.) Shadowmarch was the same way as far as having a somewhat fractured work timeline. I actually started it long ago as an idea, and then began the online version in 2001, but there were lots of interruptions along the way before the last volume appeared in print. It was originally meant to be a one-location idea that would work as the first real epic fantasy television series.

If you could have dinner with someone dead or alive, famous or not famous, who would it be and why??
It depends. For pure pleasure I would choose someone who was a great wit, like Oscar Wilde or Dorothy Parker, but I'm also a history buff so it would be tempting to meet Akhnaton or Moses and solve some of the great historical mysteries. Socrates might be fun. (I'm assuming we'll all be able to communicate, because I don't speak Greek or ancient Egyptian.)

Let's do something fun...write something about each of the next 10 words in 10 words or less.

Introspection
I love to think, but only secondarily about myself.

Chaos
I'm expert on the domestic kind. The other I avoid.

Energy
What it all comes down to.


Balance
Easier to say than to find.
Fantasy
Truths we invent.


Imagination
My livelihood, my solace, and my weapon.


Freedom
Worth everything we pay for it.

Intelligence
Yes, please.
What made you decide to jump on the E-book trade?? And how do you feel about it??
The rules are changing and we're right in the middle of the biggest shift in the movement of ideas since the invention of the printing press -- maybe bigger than that. It only makes sense to experiment with different ways of doing things. I don't want to be the last buffalo hunter in the middle of farm country.


If you found yourself on a deserted island, what 10 things would you take and why?
Too general, I'm afraid. Can I take a boat? Laptop? If it's just books and music, it would probably be Pynchon, Shakespeare collected, The Bible (never read it all the way through) and some other favorites. Music would be heavy on classical, esp. Mozart, and depending on how many other choices I'd be taking lots of pop music too. But if you want me to narrow it down you have to be much more specific as to what I can take and not take.

How do you write your books?? Are you by the seat of your pants writer or do you plot out your books in advance??
Books like mine take both. I have to plan enough that I can foreshadow stuff from the ending in the early volumes, but a lot of the richness comes as I'm writing, so I can't plan everything. It's a tightrope walk and you don't want to lean too far to either side. I try to plan some (but not all) of the big moments, including a general idea of how things might end, then leave it to discovery to fill in the in-between stuff.

And last by not least, if you could time travel what period of the history of future would you go to??
Near-future where the learning curve isn't too steep and people are still eating things other than krill paste and sawgrass extract, please.
Feel  free to any other interesting tidbits about yourself:)
My current books are about an earthbound angel named Doloriel (earth name Bobby Dollar) who is a minor functionary in the ongoing war between Heaven and Hell, but who has a way of getting himself into the middle of things far too big for him to comfortably handle. The first volume will be called THE DIRTY STREETS OF HEAVEN, the second will be HAPPY HOUR IN HELL, and the third should be SLEEPING LATE ON JUDGEMENT DAY.
Posted by Unknown at 3:51 PM