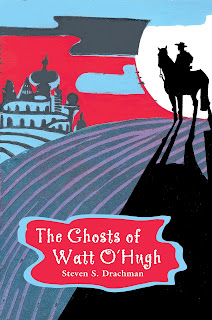 Thanks Heather, for inviting me to guest-post on your site. I’m going to talk about “Writing What You Know” (which is the oldest advice in fiction).
It’s with a little nervousness as well as excitement that I plan author events this Fall that will take me, among other places, to Laramie, Wyoming, and Leadville, Colorado, two cities I write about (quite fantastically) in my historical science fiction novel, The Ghosts of Watt O’Hugh.
I have never been to Laramie, and Leadville only briefly, if at all, long ago.
At one point early in the novel, my19th century hero, the titular Watt O’Hugh, finds himself locked up in Laramie’s territorial prison, planning a jailbreak. Near the end, he has a harrowing time in bustling, gilded, silver-rush era Leadville, from which he only narrowly escapes. In fact, my Laramie reading will take place in the very prison where O’Hugh is incarcerated (it’s now a museum). What did I get wrong? I am sure they will let me know!
In my book, I give my own city, New York, the same treatment. In July 1863, after Watt O’Hugh cycles north up Riverside Drive with socialite/love-of-his-life Lucy Billings, he comes to tree-shrouded country roads, then lies with her in the grass by the River; they watch the stars come out, their fingers entwined. Concrete has killed those trees and those country roads, and there are no stars in New York city, not anymore. I would give anything to experience 19th century New York nightlife, to spend an evening in the concert lounge at Broadway and 4th Street that J.P. Morgan has the pleasure to visit on page 152. And don’t get me started on China at the turn of the first Millennium, which also plays a role in the book.
Walter Abish wrote a novel set in post-war Germany (How German is it?) before ever visiting the country. When he flew there for interviews, he discovered that the German buses he had described in his book were the wrong color. How can he know us? some Germans wondered, hoping to discredit Abish’s critical portrayal of their society. But Abish, who later wrote a book set in Mexico without going there, seems to have believed that he couldn’t write convincingly about a topic that he knew too personally.
We’ve all heard that we should write what we know. But, when I write, I want to travel to places that I’ve never been and, especially, places that once existed, but no longer do – places that I cannot truly know, that no one alive can know. I cannot get those New York city country roads out of my mind, or the great, crazy, decadent sin-city that was 19th century Leadville, Colorado, flush with silver riches.
You can read more about Steven S. Drachman, and his novel, The Ghosts of Watt O’Hugh, at http://www.Watt-OHugh.com.
Posted by Unknown at 6:31 PM