I took time out of my enormous pile to read a long awaited next book in the Greywalker series by Kat Richardson. It didn't disappoint and this new adventure kept me turning the pages, 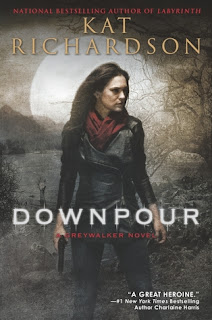 Buy Here
BLURB FROM GOODREADS:
Harper Blaine is on the mend, but evil never rests-in the latest novel from the national bestselling author of Labyrinth.

After being shot in the back and dying-again- Greywalker Harper Blaine's only respite from the chaos is her work. But while conducting a pre-trial investigation in the Olympic Peninsula, she sees a ghostly car accident whose victim insists that he was murdered and that the nearby community of Sunset Lakes is to blame.

Harper soon learns that the icy waters of the lake hide a terrible power, and a host of hellish beings under the thrall of a sinister cabal that will use the darkest of arts to achieve their fiendish ends…
As always, Kat draws me into the world of Harper Blaine and takes me on a journey down the supernatural highway. Harper is strongly nudged by the Guardian Beast to take on a job where rogue mages are taking control of the magic in the community of Sunset Lakes. Zombies, and other undead creatures as well as Japanese fox demons make an appearance further hampering Harper's investigation.
Non stop battles between Harper and the supernaturals ensue. She finds out about her newly acquired gifts.
The romance between her and Quinton becomes stronger in an unexpected way as you come to find out by the end of the book.

I recommend this book for urban fantasy lovers and invite you to check out the other books in the series.
Posted by Unknown at 12:19 AM