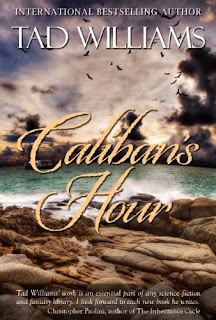 Are magic and romance really so separate? In this rich fantasy novel, Tad Williams--New York Times bestselling author of To Green Angel Tower--explores the tangled roots of sorcery and passion, and gives us an astonishing answer. Caliban is the Beast who finds in Prospero's daughter, Miranda, the Beauty to whom he tells his incredible story--an extraordinary tale of dark desires and shining wizardry

My thoughts on this book:

As a Tad William’s fan of many years, I was excited to have the opportunity to read Caliban’s Hour. The book was gifted to me by Tad’s wonderful wife Deborah Beale who I have corresponded with on Facebook. She took the time to critique my poetry which I appreciated very much. They have decided to jump on the e-book train with the reissue of Caliban’s Hour to digital format.
Another take on “The Tempest” by Shakespeare, the story is told from Caliban’s perspective. Tad Williams delivers a masterful story retelling that pulls you into the mind of Caliban. I was pulled into the story immediately with the intricate descriptions of people and places. You feel as if you are immersed in Caliban’s world and see reality from his perspective.
The story begins with Caliban’s journey from his island to the darkly rich landscape of Naples, Miranda’s & Prospero’s world.  Here he again meets up with Miranda, an unwitting victim of Caliban’s revenge. He proceeds to tell her his story and why he comes to be there. You soon learn that love turns to hate, and that they both merge to complete the cycle of vengeance.
I couldn’t help but find myself on Caliban’s side and felt that he was an unwitting victim to circumstance. I applauded his reasons for doing what he does in the end.

If you are a fan of Tad, this is a must read. His world building skills and descriptions do exactly as a good story should. He pulls you into the character’s heart and soul and leaves you wanting more.

I gave this masterpiece a 5 fairy rating as it did exactly as it should and allowed me to escape into Caliban’s world.

Tad Williams has held more jobs than any sane person should admit to—singing in a band, selling shoes, managing a financial institution, throwing newspapers, and designing military manuals, to name just a few. He also hosted a syndicated radio show for ten years, worked in theater and television production, taught both grade-school and college classes, and worked in multimedia for a major computer firm. He is cofounder of an interactive television company, and is currently writing comic books and film and television scripts as well as novels.

Tad and his wife, Deborah Beale, live in the San Francisco Bay Area with their children and far more cats, dogs, turtles, pet ants and banana slugs than they can count

You can also find him on the following social media sites.