So Sean is one of my friends from Book Junkies Facebook Group and also an exceptional wordsmith. I just love Jaclyn and her world:) As I've said before kick ass heroines hold a special place in my heart. One of the reasons why one of my characters in my book is a kickass heroine. This book is a great thriller:) You can find my review of Model Agent if you scroll back a few more posts.
He has graciously allowed me to give to five lucky commenters a copy of his book Rogue Agent, Book 2 in the Jaclyn Johnson series.
Fill out the Rafflecopter form below for entry to my giveaway. Extra entries if you Google Friend Connect, leave your name so I can check.
So without further ado, here is his interview:) 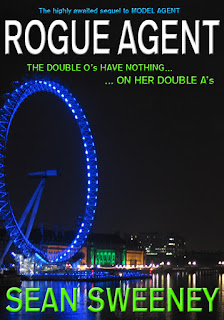 I’ve always been an entertainer and an informer. I started reading Star Wars novels when I was in my teens, and I wanted to write my own; this was before I knew what a literary agent is or what protected work was. I guess what I did is called fanfic now, and what I had written was based off the short stories and anthologies that Kevin J. Anderson had edited. But after I met R.A. Salvatore about a decade ago and discussed the Star Wars books he had written with him, I decided to write the story inside me, and that turned into Obloeron: The Quest for the Chalice, the first book in The Obloeron Trilogy.

What is your favorite genre of book to read and/or write and why??

Right now, I’m thoroughly enjoying the thriller genre. I’m liking the way Jaclyn Johnson is so easy to write. I’m an action/adventure guy, so putting Jaclyn into situations where it is imperative for her to kick ass is incredibly fun. I can’t wait to see what she wants me to do to her next! I still read Star Wars, I still read fantasy (I read Lord of the Rings once a year, and I’ll probably read it over the holidays), or anything that tickles my fancy.

What aids do you use to write your books? Music?? Nature???

None of the above. I’m a silence guy, but I must have two cups of coffee running through me before I even put my fingertips on the keyboard. Java is essential to the writing process.

What character of your book(s) do you relate to the most??

Definitely not Jaclyn; I shudder to think how my fat ass would look in black Lycra. But seriously... I see myself in a lot of my characters that I’ve written in the past, such as in my fantasy stories, i.e. Krampel and Grumpet Paddymeyer. Those are two characters who speak with their actions, which usually means hemming the heads off of orcs. Jaclyn speaks with her actions, too... but I don’t look as good as she does.

If you can quit, quit. This is a business where you have to be in it for the long haul. You have to nurture not only your words but only draw in and nurture your audience. It’s a lonely business, too. You spend hours by yourself writing, thinking. There’s enormous loads of sacrifice in writing. It’s a business that you need to take seriously if you want to succeed. If you can’t quit, then you’re a writer, no doubt. Once you publish your book, you’re going to be excited. Don’t go overboard with your promotion. Read every day and write every day. That’s the only way you’re going to succeed: by doing this every, single, day.

How do you visualize your stories?? In pictures?? Conversations? Dreams?

Dreams, definitely. Both Model Agent and Rogue Agent came to me in dreams. I wrote Rogue Agent first after a conversation I had with British author Steven Savile. At the time, I needed something to write, and I told Steve about this pretty blonde character I had dreamed about. I made Jaclyn the protagonist and sent her overseas to London for what was, at the time, her first mission. A few months later, after I had finished the first draft of RA and decided that I would self publish it instead of sending it to a publisher, I decided to write a second AGENT novel, this one being Model Agent, which I set in Boston. I had read that Michael Connelly flies back to Los Angeles to do detail research for his Harry Bosch novels, so I went into Boston one Tuesday last August – if you saw a guy walking around wearing an Arsenal jersey and a clipboard, that was me – to do research. Instead of making MA the second story in the series, I pushed the production forward, created a couple of new characters that I knew would be one-time shots, and then adjusted RA’s details slightly to fit the new continuity.

If you become a multimillionaire overnight, how would you use the money??

I’d give it to the government to adjust the debt ceiling... oh hell, I couldn’t type that with a straight face. I think the first thing I’d do is donate to literacy programs and literacy awareness. There are too many kids who don’t read often enough and don’t read at their grade level or above, and that is disheartening.

How long did it take you to write Model Agent and Rogue??

If you could have dinner with someone dead or alive, famous or not famous, who would it be and why??

I would say Professor Tolkien. I’d love to thank him for giving the world such a fascinating story such as Lord of the Rings. I told the daughter of a friend of mine who wants to be a writer that is she wants to learn about world building/creation, as well as how to describe something, to read LOTR. The way Professor Tolkien does it is what I try to emulate in every project. I love the description he uses. He’s just incredible. And yes, he would pick up the check.

Let's do something fun...write something about each of the the next 5 words in 10 words or less.

Books
The backbone of our great society.

Energy
It’s why I drink two cups of coffee a day.

Balance
Don’t ask me to walk a straight line.


Feel free to any other interesting tidbits about yourself:)

Sean Sweeney is an obsessive Tweeter, baseball/world football fan and reader. He is the author of 11 novels, including the brand new ZOMBIE SHOWDOWN from Bucks County Publishing.
Posted by Unknown at 10:24 PM