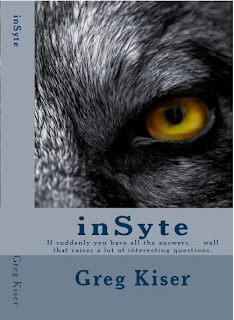 Greg Kiser delivers a riveting futuristic tale of man's reliance on technology and what could happen if you allow it to control you.
It is also a portrait of a man's loss of rein on sanity and coming to terms with the darkness within oneself. Enter Mitch as an ex-Navy Seal whose journey to knowledge leads him down the path of darkness as he tries to maintain order within his life. He discovers new technology which ends up controlling him and taking over his everyday life. It's an addict's road to redemption. He learns that shadows lurk deep within the human mind and everything is not what it seems.
I found myself drawn into the story, slowly at first and then quickly as the psychological twist presented itself. I would recommend this to readers who enjoy dystopian novels and psychological thrillers with a dash of metaphysical which rolls up nicely into a book that keeps you turning the page.
I gave this book 5 fairies and applaud Greg with his intricate story into the human psyche and how technology can turn on you when you least expect it in terrifying ways. And how the darkness within oneself leads you to enlightenment.

It’s Tampa Bay and the year is 2020. Ex-Navy SEAL Mitch "Double" Downing discovers how to tap into the internet with his mind. His new inSyte provides transparent access to the sum of all human knowledge recorded since hieroglyphics. More than mere information – Mitch can see into men’s hearts and be all places at all times (easy in an ‘always on’ surveillance society with fourth generation tweets). Sort of like God.

But inSyte has ideas of its own as the software exposes a politician’s “divine” plan that will unwittingly slaughter millions of people. Is killing the man the only way to prevent Armageddon? The politician’s daughter would probably disagree. And she happens to be the love of Mitch’s life. Losing Kate would be too damn much collateral damage.

At the center of the conflict is a wolf-like killer who will stop at nothing to murder the ex-Navy SEAL.

And Mitch must come to grips with inSyte’s dark side – a dominating addiction that soon controls his thoughts and places him on a steep slide to self destruction.