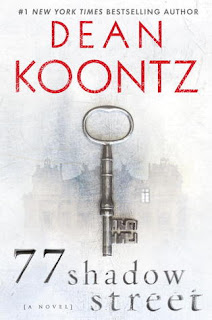 This was a loan that I received from our local library.

I am the One, the all and the only. I live in the Pendleton as surely as I live everywhere. I am the Pendleton’s history and its destiny. The building is my place of conception, my monument, my killing ground. . . .

The Pendleton stands on the summit of Shadow Hill at the highest point of an old heartland city, a Gilded Age palace built in the late 1800s as a tycoon’s dream home. Almost from the beginning, its grandeur has been scarred by episodes of madness, suicide, mass murder, and whispers of things far worse. But since its rechristening in the 1970s as a luxury apartment building, the Pendleton has been at peace. For its fortunate residents—among them a successful songwriter and her young son, a disgraced ex-senator, a widowed attorney, and a driven money manager—the Pendleton’s magnificent quarters are a sanctuary, its dark past all but forgotten.

But now inexplicable shadows caper across walls, security cameras relay impossible images, phantom voices mutter in strange tongues, not-quite-human figures lurk in the basement, elevators plunge into unknown depths. With each passing hour, a terrifying certainty grows: Whatever drove the Pendleton’s past occupants to their unspeakable fates is at work again. Soon, all those within its boundaries will be engulfed by a dark tide from which few have escaped.

Dean Koontz transcends all expectations as he takes readers on a gripping journey to a place where nightmare visions become real—and where a group of singular individuals hold the key to humanity’s destiny. Welcome to 77 Shadow Street

Winnie would have to be my favorite character. He is a kid who ends up finding the strength within to overcome the psychological trauma that occurs in the book and help the autistic girl Iris cope with the terrifying landscape of the future.

I’ve always been a fan of Koontz’s work. That being said, I started reading it thinking it would be like his other books but was pleasantly surprised.   He kicked up the psychological horror up a notch and I enjoyed reading this book immensely. As far as the other bad reviews on this book, I would disagree with most of them. Koontz’s glimpse of the future is hair-raising and touches upon Nano-machine technology which is even now in the working stages. It was a brilliant insight in the minds of the people of Pendleton and you learn what people can and will do when they get to their breaking point. You find out the courageous ones and the ones who are the cowards.

I would recommend this book to fans of future apocalypse scenarios, not quite dystopian but enough to keep you turning the pages and leaves you thinking whether it could really happen. It’s also good for the readers who like psychological suspense and horror.

This gets 5 fairies for giving me food for thought and the heart stopping scenes that thrill as well as horrify you.