The Last Beginning
by Rachel Firasek 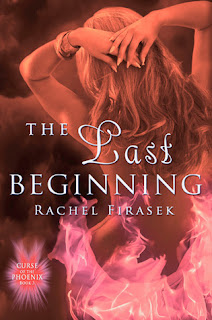 FIND RACHEL FIRASEK ON THE WEB

Though she’s always hated being a phoenix, Sadie has to
admit immortality has its advantages. She’s seen and done more in the last 150 years than she’d ever dreamed of, but she can’t get past the fact that Osiris has done nothing but manipulate her and her fellow phoenixes.

Or that, when her last incarnation as a phoenix comes to a fiery end, the fire slowly begins to consume her body.

Sun god Osiris is ashamed of his role as ruler of the Underworld, but he unless he can figure out how to save Sadie, that’s exactly where she’s going to end up. Permanently. Terrified he’s going to lose her, he takes her on a hunt for The Book of the Dead, which is the only way he knows he can save her—even if it means she’ll hate him forever.
Description from Amazon.com

The last chapter of the Curse of the Phoenix series was a beautiful ending to the trilogy.
For anyone who loves a good romance, this is the book for you. I really liked Sadie with her fiery personality and was pulled into her story. I think Sadie is my favorite Phoenix.  Her journey is one of the best so far.
The book reminds me of the complexity of love and all the feelings that come into play.
I give this book 5 fairies for the simple truth of love and for making me feel the story.
Bravo, Rachel. I will continue to be a fan of your books.