Today I’m pleased to welcome Gracen Miller to my little home on the web with an interview with Micah. She is also giving away some swag so check out the info below in regards to that. 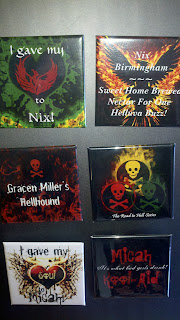 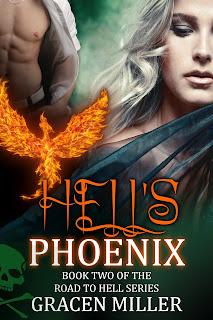 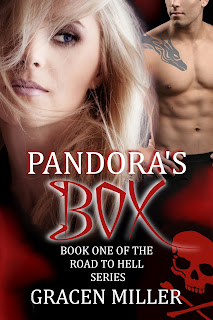 Road to Hell Series Character Interview
~ Meet bad boy Micah Dominus ~
By Gracen Miller
Heather: Today at Earth Book Nook, I have sexy bad boy Micah Dominus from the Road to Hell series with me. He was introduced in the prequel, Madison’s Life Lessons, and in book one, Pandora’s Box. On February 17th, his next edition in the saga will be released in, Hell’s Phoenix. Thank you for joining me today, Micah.

Micah: Thanks for inviting me, Heather.

Heather: For those who haven’t read Pandora’s Box, book one in the Road to Hell series, tell us something about yourself. Something we can only discover between the pages.

Micah: Can’t give away too many of my secrets or readers will miss all the surprises. *wicked grin* But I’m of the archangel variety.

Heather: *smiles and lowers voice to a sultry sound* That makes you a bad boy angel, then?

Micah: *chuckles* Technically speaking, yes. I don’t call myself an angel any more. I prefer to disassociate from heavenly society. Father and I aren’t exactly on speaking terms. *winks*

Heather: Some readers would say you’ve been cruel to your wife, Madison. Would you say your actions are justified?

Micah: *nods* Yes. Everything I’ve done has been for her advantage.

Heather: Mmhm…how can you justify violence?

Micah: How can I not when it’s for her benefit? In my world, there is violence and then there is violence. I never tortured her, but only frightened her. She was never in any real danger, even though she perceived differently. All prophecies indicated aggression was necessary to push her to claim her destiny. I’d be shirking my duty as her husband if I ignored the divination. And Madison is fated to be too great to remain a weak mortal.

Heather: So would you say your actions toward her are misunderstood?

Micah: I think I’m misjudged by human standards. I am thankfully not human. I’ve existed longer than the human race has lived. I’ve witnessed the rise and fall of civilizations. I do not process the world as a mortal does because my timeframe is not limited as yours is. What is harsh through human eyes is very mild by even heavenly standards. Father destroyed Sodom and Gomorrah with fire, turned Lot’s wife to salt just for a peek of that destruction, allowed Job—a devoted subject—to suffer to prove himself loyal to God, and all of that after He killed many with the flood. *shakes head* Yet, you would judge my actions, call them appalling, when Father has proven time and again the cruelty He can inflict. All of that from a supposedly loving creator. *scoffs* Unbelievable hypocrisy. What did Father’s actions acquire? I’ll tell you. Humans so frightened they worship him out of fear. Where’s the freewill in that? *inhales deeply* My wife lives. She is stronger now than she has ever been, all thanks to my tactics. *swipes his fingers through his chin-length hair* Torture is my specialty; I sip it as you might fine wine, savoring and relishing the pain I inflict…because it spawns a new and better creation. Something Father would disapprove of. *intense stare, refusing to allow Heather to look away* If I’d wanted Madison tortured, she wouldn’t have survived my initial assault. No human could. I scared the hell out of her, yes. Not once did I enjoy it. What human hasn’t on occasion used fear to engender compliance among those they love? If you mortals wish to paint me a monster, then feel free. I’ve been called worse. By my Father, no less. I do what I do so that in another thousand years, Madison and I will still be together, while all of you will be cold and long dead in your graves. When mortality isn’t terrifying you with your morally pretentious righteousness, then we’ll have a genuine debate on my actions, because until that time, none of you can relate to my logic.

Heather: Right…*shifts in her chair* It sounds as if our *finger quote* misjudgment *end finger quote* of you bothers you.

Micah: *smirks* I really don’t care what you mortals think. All that concerns me is the safety of Madison and Amos.

Heather: How do your actions differ from God’s when you’re attempting to frighten her into submission? How is that freewill?

Micah: I will not punish Madison if she chooses a different purpose from mine.

Micah: Not even a little.

Heather: You mentioned that God forces worship through fear…haven’t your actions created fear in Madison?

Micah: *snorts* Trust me, she does not fear me. It is I who lives in fear of her discovering how much she means to me how, much she could manipulate me. *tenseness leaves his shoulders and his face softens* Madison means everything to me. As corny as it sounds, she is my world. There is nothing I wouldn’t do for her.

Heather: You love your wife?

Heather: There would be some—Madison included—that don’t believe you truly love her, but think you are manipulating her for your own gain. What would you forfeit for her to prove your love?

Micah: That would be a private matter for Madison and me to discuss.

Heather: Would you ever consider giving up your kingdom for her?

Micah: *a tiny flinch of surprise* Again that would be a private matter between Madison and me.

Heather: It’s easy to say “I love you”. Actions speak louder than words. Witnessing your attacks toward her in the Road to Hell series, I would say you’re love for her isn’t demonstrated as much as you’d like. If you could do one thing to show your love to Madison, how would you go about it?

Micah: Persistent little mortal, aren’t you? *leans forward in his chair, eyes glowing* How about we alter this line of questioning and move along before I’m forced to move you along…*flashes a dark grin as he chucks her chin*

Heather: *swallows and jerks away from Micah* Do—ah…*peers at notes* How will you…ah…react if Madison chooses Phoenix over you?

Micah: *relaxes into his chair and stretches his legs out in front of him* I’m convinced she won’t. But what if she does? I can see that question burning in your eyes. *tsks at her* I’ll play along. If she does, what is sixty years waiting for him to die when I have eternity on my side? It’s a blink in time. I would wait for her to discover herself, because her attraction to me is too great for her to deny me for long. She will eventually be mine once again.

Heather: If you could tell Madison anything, what would it be?

Micah: Embrace what you are, not for me, but for you and for Amos, because nothing can stop the ride you’re on.

Heather: Will you tell folks who Amos is, please?

Micah: The greatest kid ever, who just happens to be my son with Madison. He’s got a lot of natural talent and charm, just like his Daddy. *winks*

Heather: Well, that looks like all the time we have today. Micah, thanks so much for taking the time out of your busy schedule to join us.

Heather: Is there anything you’d like to say to my readers?

Micah: Remember there are always two sides to a story. One version is not always the truth.

***
I hope you enjoyed getting inside the head of Micah from the Road to Hell series. You can read the first three chapters of Pandora’s Box and Hell’s Phoenix, on my blog at:
http://madisonroadtohell.blogspot.com/

Leave a comment for a chance to win your choice of one of the buttons/pins pictured below…but PLEASE leave your email address so I can contact you if you’re the winner! Winner will be drawn on February 15th, sometime after noon CST.

SECOND CONTEST:  Send me proof of purchase where you BOUGHT Pandora's Box (it's ONLY 99 CENTS at Amazon for a limited time) to roadtohellseries@gmail.com (put in the subject line PB CONTEST) and I will enter you to win an e-copy of Hell's Phoenix. Contest ends on February 16, 2012, midnight CST and winner will be announced and forwarded their e-copy of Hell's Phoenix on February 17, 2012 (the day of release). If you refer a friend to this contest and they purchase a copy of Pandora's Box because of your referral, have them tell me and I will give YOU 10 extra entries! (For further details, check out contest info here: http://madisonroadtohell.blogspot.com/2012/02/99-cent-steal-contest.html).

Thanks for having Micah with you today, Heather!

Where you can stalk me—not really!—but I would love to meet and interact with you:

Where does the road to Hell begin?
What happens when your son turns homicidal overnight and your husband disappears on his way to work? Do you cower in fear or fight for your life? Madison Wescott fights against the odds. Distrustful of a God she doesn't believe in, she finds herself face-to-face with a world she didn't know existed and discovers her own soul is darkened with demonic connections.
With good intentions? Or by demonic design?
Phoenix Birmingham bursts into Madison’s life in a whirlwind of sarcasm and sexual appeal. A hero for the masses—and for her jaded heart—but few will ever know the sacrifices he has made or the sacrifices to come. Discovering her entire life has been influenced by multifaceted paranormal beings, Madison is determined to defeat the apocalyptic blueprint fate has decreed, but only one man dares to challenge the supernatural forces manipulating them. Even with Phoenix's aid, can destiny be denied? Or will demonic design prevail while they pay the crucial price with their souls?

In a small, sleepy Alabama town the battle for mankind's liberty has begun...

Hell’s become more than just a playground for the wicked…

Going to Hell was supposed to save Madison, but knowing she’s dead because of his failure leaves Nix with only one thing to live for. Revenge. With Micah’s help he learns to use his Messianic power. Anything for Mads has become his mantra, even if it means killing innocents to gather the power he needs to succeed. A tsunami he unleashes on a Gulf Coast city is stopped with magical interference, and Nix is more than surprised to feel Madison in the opposing magic. Can he and Micah set a trap to lure her out?

Pandora’s Box…once you open it, there’s no turning back!

Madison has done the unthinkable, opened Pandora’s Box to save Nix from Hell. And failed. She’s willing to risk her own life to rescue Nix, but she worries about the welfare of her accomplice in the mission and leaving her son behind. Following up on a lead, she’s ambushed by Nix and Micah. Shocked and hurt to discover Nix has become a willing participant of Hell, she’s more certain than ever she won’t escape the demonic fate her husband outlined for her. While in Hell, she discovers denying the emergence of her succubus is futile, which means getting Nix out of Hell after embracing her inner demon just became a very real dilemma…
***
PANDORA’S BOX is available now at the following sites: