THE DIRTY STREETS OF HEAVEN BY TAD WILLIAMS

The dirty streets of heaven
By Tad Williams 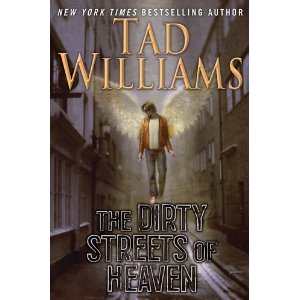 This was an Advanced Reader’s Copy given to me by the author.

Bobby Dollar is an angel—a real one. He knows a lot about sin, and not just in his professional capacity as an advocate for souls caught between Heaven and Hell. Bobby’s wrestling with a few deadly sins of his own—pride, anger, even lust.

But his problems aren’t all his fault. Bobby can’t entirely trust his heavenly superiors, and he’s not too sure about any of his fellow earthbound angels either, especially the new kid that Heaven has dropped into their midst, a trainee angel who asks too many questions. And he sure as hell doesn’t trust the achingly gorgeous Countess of Cold Hands, a mysterious she-demon who seems to be the only one willing to tell him the truth.

When the souls of the recently departed start disappearing, catching both Heaven and Hell by surprise, things get bad very quickly for Bobby D. End-of-the-world bad. Beast of Revelations bad. Caught between the angry forces of Hell, the dangerous strategies of his own side, and a monstrous undead avenger that wants to rip his head off and suck out his soul, Bobby’s going to need all the friends he can get—in Heaven, on Earth, or anywhere else he can find them.

You’ve never met an angel like Bobby Dollar. And you’ve never read anything like The Dirty Streets of Heaven.

Brace yourself—the afterlife is weirder than you ever believed.

It would have to be Bobby Dollar. His human qualities shine through his angelic soul. I also like Countess of Cold Hands because she really does show that the lines can blur and you can find yourself in the grey area between.

This is a Rip-Roaring Trip through the fields of Heaven with a quick detour across Purgatory back to the gritty side-streets of Earth. Tad Williams still remains one of my favorite authors and he doesn’t disappoint with this foray into urban fantasy. The first thing I was surprised at was the number of pages in this book. Not the typical Williams storyline but still had the descriptive elements that I’ve come to enjoy. It’s these exact elements that really help me jump into the story and get to know the people inside. Bobby Dollar is one of the characters you wish you could have a drink in a pub with and really listen to what he has to say. The human qualities are really striking and mask the fact that he really is an Angel.
The take on Heaven and Hell and everything in between was mind-bending and I especially liked Hell’s Prosecutors.
All is not what it seems and this is a common theme throughout the whole story.
Dollar is always on the run from the next baddie or Hell-beast while somehow invoking human emotions and concepts such as love, doubt, and passion. He can’t seem to get a break from demons, hellbeasts, angels, or spirits, makes you really feel for the guy and root for the underdog.
There are a lot of otherworldly visitors and that never ceases to fascinate me. Everything you thought was real is turned upside down, inside out and sideways. When you think you get an answer, another question pops up.
I would recommend this to urban fantasy fans. There are action scenes, love scenes, and surreal moments. It is what I always look for in a book and sometimes have difficulty finding. It really is a complicated case of Good vs Evil and you begin to wonder whose side you are on. The grey area between doesn’t seem so wrong.
I give this book 5 fairies for the complex array of supernatural elements, human emotions, and action packed scenes that keep you turning the pages and running through the book with Bobby Dollar.

Some of my favorite Dollar quotes:

“Outward appearances only seem to be important to earthbound types like me, staggering around in meat bodies all the time, living mostly in three dimensions.”

“There is no greater bliss than ignorance.”

“I called them bosses or employers, but unless you’re in the mob or an army under fire your bosses can’t usually kill you when they get pissed at you, and no other bosses but mine and my opponents’ can have your soul jerked out of your body and sent to the deepest fiery pits to suffer for eternity. Unless you work for Wal-Mart.”

“Jude is like one of those favorite books where you find something new every time you open it.”

“Either way, by the time the preliminaries ended a whole lot of nothing had been said, but the massive ballroom stank with the odor of violent subtext.”