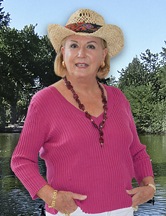 About Lisa April Smith
Author Lisa April Smith lives with her husband, He-Who-Wishes-to-Remain-Anonymous, in
Eternal Playland, Florida, a delightful spot just off I-95. Ms. Smith describes Eternal Playland as
"a little piece of level heaven with occasional dampness, where the bugs are plentiful but respectful, and even the smallest strip mall contains at least one pizza place and a nail salon."

Before discovering a passion for writing, Ms. Smith sold plumbing and heating, antiques, taught ballroom dancing, tutored, modeled, designed software and managed projects for IBM.  She
She returned to college multiple times to study anthropology, sociology and computer science, in which she holds degrees, as well as psychology, archeology, literature, history and art. Combine those widely diverse interests with a love of travel and a gift for writing page-turners and it’s easy to understand one reviewer’s unbridled praise for Exceeding Expectations, “She (Ms. Smith) has a brilliance for conveying characters, and the intellectual capacity to place them in historical settings that sparkle with glamorous detail . . . that make it fun to read . . . ” But it takes much more than lush settings, an eye for detail and a love of history to write a page-turner. Read what another reviewer said about Exceeding Expectations: “Lisa April Smith . . . has woven an intriguingly rich tapestry of delightful well-developed characters into a perfectly balanced plot bursting with riveting mystery, crimes of the petty and the horrible sort, suspenseful twists, and romantic tension complete with love scenes that sizzle and pop. . . Clearly, this author has, and wishes to share with her readers, what the French call joie de vivre  – not simply the joy of life – but an all-encompassing appreciation for every facet of life.”

Today, as part of her Virtual Book Tour, I have the pleasure of hosting author Lisa April Smith.  Welcome, Lisa.
A:  Thank you for inviting me, Heather. Delighted to be here. 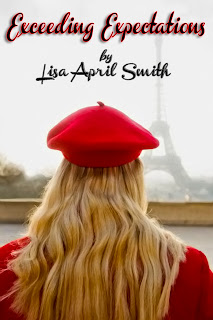 Q. When you’re not writing, what you enjoy doing to relax?
I love travelling outside the US – which we do from time to time, when I can convince He-Who-Wishes-To-Remain-Anonymous to cooperate. However, if you’re talking about everyday activities, I read, watch reruns of “30 Rock,” play golf, tend to my cactus and orchids, visit museums, talk on the phone with my kids, volunteer tutor at an afterschool program and do laundry. While most people consider laundry a tedious chore, I find filling and emptying the washer/drier an excellent mindless break. Ironing? Not so much.
Q. I’m sure fans would like to know, did you always want to be a writer?

I always knew that I could write, but I understood enough about the field to understand that the risks were enormous – that many writers devoted years of “blood, sweat and tears” to projects that never sold. Being a realist, and someone who likes to pay the rent and eat regularly, I didn’t allow myself to consider writing fiction until I could afford to.

Q. If you could spend an hour with any author, dead or alive, who would that be and why did you choose him/her?
A. Tough decision. I think if I had to choose one it would be Mark Twain (Samuel Clemens). He was a brilliant author, entertaining speaker and daring social commentator. Portraying black characters as brave, loyal, admirable human beings with souls, he took a stand against slavery and social injustice. Black or white, his characters were memorable, flawed and real.  Clemens’ life was dotted with failures, loss and personal tragedy, but he was known for his wit and engaging disposition. How I would love to sit down with him one lazy afternoon for an unhurried chat.
Q. How would you describe your approach to writing? Are you a "fly by the seat of your pants" or a "plot and outline" type?

I’m a former IBMer. When it comes to work, I don’t do things “by the seat of my pants.” I define significant characters and sketch out plots beforehand. Except when we’re traveling, five to six days a week, I’m at my desk about 7:00 am. Some people call it drive, discipline or dedication. Personally, I think it’s a clear sign of a compulsive disorder.

Q. Because I enjoy finding out what people love apart from books, tell us - what are some of the things that you love?

First off, I adore my family. Next comes friends. I want to know how they’re all doing. Whatever they want to share. The highs. The lows. The funny anecdotes. The complaints. The promotions, awards, glowing praise, weddings and new babies. The rotten colds and dreaded illnesses. If they just need a sympathetic ear or my help. Life is not a spectator sport. I want to be on the field, in the action.

Under subjects, in no particular order, I love learning about history, psychology, anthropology, sociology, archeology, outer space, reading the best examples of any book genre and art. I enjoy the widest variety of music including: Country and Western, jazz, opera (light and serious), Broadway, Rhythm and Blues, Flamenco, Classical Guitar, Blue Grass and Indian ragas. Doubtless I’ve forgotten a few.

After giving your question a lot of thought, I’ve concluded that my passions could be reduced to this. I love learning about human achievements and all facets of human behavior, past and present.

Q. Where do you get your inspiration?
A. My books are generally inspired by media coverage of events and people that I find intriguing. In 1998, Florida television and newspapers were reporting a story of a local Palm Beach socialite (ironically named Fagan) arrested for kidnapping his daughters eighteen years earlier, when they were 2 and 5 years old. The primary reason that it had taken eighteen years to find Fagan was that he had successfully reinvented himself. As William S. Martin, a handsome widower with two young daughters and no apparent means of support, Fagan had met and married a wealthy Palm Beach widow. After their divorce, another affluent woman agreed to wed and maintain his family’s plush lifestyle.
Neighbors, friends and the teachers at the girls’ tony private school all described him as “likeable,” “charming” and “devoted father.” Throughout his arrest and subsequent proceedings, his loyal third wife steadfastly stood by him, as did both daughters. Perhaps what most surprised people who followed the case was that the girls’ mother, a research scientist teaching at the University of Virginia, through the media and her attorney, repeatedly begged her daughters to meet with her and they refused. To my knowledge, that continues to this day.
As I was following the case I found myself thinking that there was an even juicier story behind this headline-grabber and set out to create one. I began with a few core facts. A man with an invented name and history, twice married to wealthy widows, living in Palm Beach, playground of the mega-rich and famous, and involved in a crime. Two adoring daughters unaware of their true identities. Over time my imagination happily supplied the rest. A townhouse off Fifth Avenue. A sprawling estate in Virginia. Romantic Paris in the years prior to WWII. A riveting past for Jack Morgan: skilled lover, lack-luster artist and irresistible rascal. A full-blown range of challenges and hard-wrought triumphs for his traumatized daughter Charlotte (Charlie).
Q. If Exceeding Expectations was made into movie, have you given any thought as to casting?
A. That’s a question often put to me at book events. I can see George Clooney as Jack Morgan at fifty. He has the talent to play serious and comedic roles, and the looks and sex appeal to play Jack. The problem is, what actor could make viewers believe that he’s George Clooney at twenty-five and thirty? Maybe false eyelashes would help. Deborah Previte, the Bookish Dame, thinks Andy Garcia is a Raul Francesco clone. I’d love to hear suggestions from readers. As for my heroine Charlie, I see a young Gwyneth Paltrow playing her. Sadly, I don’t know how to turn back time in real life.
Q. I've heard that Exceeding Expectations has a sequel. Can you tell us the title and when it's going to be available?

The title is Paradise Misplaced (another playful reference to an iconic book). I can’t say with certainty when it’s going to be available. I suggest fans check my website http://www.LisaAprilSmith.com for the latest information. The one thing I can say about it with certainty is, “I promise a page-turner fun ride.”

About Exceeding Expectations
It’s 1961 and Palm Beach socialite, irresistible rascal and devoted father Jack Morgan encounters genuine danger while staging his suicide to shield his beloved daughters from disgrace. Next, meet his daughter Charlotte (Charlie), an over-indulged 23 year-old struggling to cope with the traumatizing loss of her beloved father, her sister’s resulting mental breakdown and the discovery that she’s suddenly penniless. Fortunately Raul, an admiring young attorney, appears to offer assistance. As terrified as she is about daily survival, Charlie soon realizes that she has to learn what drove her father to kill himself. With Raul’s much needed ego-bolstering, the drive of necessity and unforeseen determination, Charlie finds a practical use for her annoyingly lean 5’ 11” frame. In time, this career finances her hard-wrought independence, her sister’s costly treatment and an emotional eye-opening journey to Paris.
Jumping back in time to romantic pre-WWII Paris, readers meet young Alan Fitzpatrick – aka Jack Morgan – lack-luster artist and expert lover and the bewitching girl who will become the mother of his children. Not even Charlie’s relentless detective work will uncover all Jack’s secrets, but in a fireworks of surprise endings, she discovers all that she needs to know and more:  disturbing truths about her father, her own unique talent, crimes great and small and a diabolical villain.

Chapter One of
Exceeding Expectations