Today, I'm welcoming Lea Ryan to my blog for an interview and Book Giveaway of her book Lair of the White Wyrm. She has graciously offered 3 e copies of her book to 3 lucky winners. Please fill out the Rafflecopter form below. If it doesn't work for some reason, just leave a comment on this blog posting and answer the questions, what do you fear??


Lair of the White Wyrm 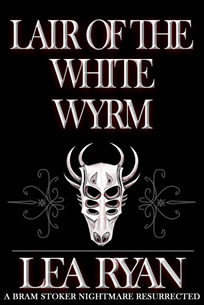 
Sometimes when you run from your problems, they follow you.


Eric Duncan wants nothing more than to be an ordinary, sane guy. He believes he can escape his troubled past by leaving home. However, the voice in his head, that of his dead friend Benjamin, fights him every step of the way.


Eric finds his new home is a place filled with secrets far darker than his own. A monster prowls the grounds, and it wants to keep him close.


He will discover that his inner demons aren’t the only things he should fear. In order to confront the wyrm and survive, he must also face the worst parts of himself.


Creative outlets keep me sane. I have a lot of mental energy that needs to go somewhere, I guess. I wrote creatively as a kid and then took a long hiatus during my teenager years and some of my twenties. I can’t remember the moment I decided I was going to write books. It was probably a gradual thing that progressed into obsession. Now I can’t imagine not writing.


What character(s) of your book(s) do you most relate to??


If we’re talking Lair of the White Wyrm, I can relate to most of the characters in some kind of way. The people in the story are like amped up versions of components of my personality. I’ve felt uncertainty like Eric’s and energy like Chelsea’s. I think they’re easily relatable characters, for the most part. Arkwell fears death and loss. Isabella has had her heart broken. They all have very human conditions.


How do you visualize your stories? By dreams? Inner monologue with your characters, dreams, etc.?


My stories run through my head like movies. I write down what the characters say and do. The story is usually pretty vivid in my mind. Is that weird? It’s probably weird. I’m going to guess that it comes from watching far too many movies and TV shows.


That method is really useful when I need to experiment with different courses of action. I can mentally run through a scene before I actually write it.


What is your writing ritual? Music?? Silence? Meditation?


I write with some music on and the headphones in. The music selection is usually classical, but I also have a thing for electronica. Instrumental is a requirement. When I hear someone singing, it interferes with whatever I try to type. I lose my train of thought.


What inspired you to write Lair of the White Wyrm?


Lair of the White Wyrm was inspired by Bram Stoker’s final novel.  The original book is a dark story with interesting characters. The worm (Stoker’s spelling) itself was a good premise for a story. Her name in that book is Lady Arabella. She has very human desires in respect to a man and money. She interacts with the people around her.


I thought there were some issues with the original plot, which I’ve seen echoed by reviewers on Amazon. It’s very scattered with too much going on. There’s a lot of disconnect that makes the story difficult to understand in spots. The fact that some editor sliced out like 5 chapters in a later version didn’t help matters. I think that second version is the one I read. The story jumped from Adam (protagonist) barely knowing a woman to him being in love with her and wanting to marry her. It was very strange.


If you could be a book genre? Which one would you choose and why?


If I could be a book genre, I would probably choose paranormal romance. I love horror, but I wouldn’t want to be horror. Paranormal romance is nice because there’s a balance between romance and adventure. They’re fun to read.


Be yourself. Always be open to learning from others, but don’t try too hard to emulate. Also, don’t write any story you aren’t completely in love with because a lack of enthusiasm shows.


If you were stranded on a deserted island, what 5 things would you bring and why??


I would take the most awesome tent I could find because I’m really sort of an inside girl. Being outside for a long period of time is not always wonderful for me. I do go hiking and I ride my bike sometimes, but there’s always an inside to which I can return at the end.


I think I would need one of those satellite phones so I could call people. I like being alone, but I need people around, occasionally.


A stack of notebooks. For writing and drawing on.


Pens. For writing and drawing with.


And a volleyball so I can make a “Wilson”.


What other books do you have to write or be written in the horizon??


I am very excited about my next project. I can’t say too much about it for now, because the release is too far off for such things. I will say that it involves a fallen angel and a cult. It won’t be a graphic novel, but I want it to have that feel, a kind of hip (only old people say “hip”),  edgy, fast-paced with a fair amount of action.


If you could have dinner with anyone alive or dead? Who would it be and why??


I would have dinner with Edgar Allan Poe just to see how his mind works. The way he was able to string words together was amazing. I would also ask what the heck happened to him before he died. They say that he was found incoherent and wandering the streets wearing someone else’s clothes, and then he died!


If you could time travel, what time period would you go to and why??


I have a thing for the 1800s, so probably somewhere in there. I like how when that time period is portrayed, everyone is formally dressed. Also, there’s something innately creepy about those times too, maybe because of some of the writing. Lovecraft, Poe, Mary Shelley, Stoker. It was like the golden age of gothic.


How do you write your books?? By the seat of your pants? Or is it plotted out in advance??


I plan meticulously. Trust me, it’s better that way. If I just wrote with no sense of where I was going, they story would be a mess. I would forget details. I would wander off in the wrong direction. I need to have everything in order before I begin. The planning takes a while, but the advantage is that I never get writer’s block.


How many books in the future do you see in the Lair of the White Wyrm?


Lair of the White Wyrm was probably a one shot deal. I liked it very much, and I did leave it open in case I decide I want to return to it, but for now, I have no plans for a sequel. We’ll see, though. You never know what the future holds.


Here is a twist...5 words or less, what comes to your mind first??


Rainbow – Rainbow Brite. I had one.


Fantasy – Game of Thrones. Love it.


Panther – Bagheera of the Jungle Book.


Feel free to add any information that you feel I left out here. Please include your social media links.


Blog: http://Lea-Ryan.blogspot.com
a Rafflecopter giveaway
Posted by Unknown at 12:01 AM