KILL THE DEAD
BY RICHARD KADREY 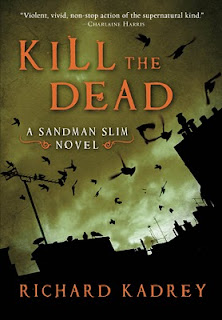 James Stark, a.k.a. Sandman Slim, crawled out of Hell, took bloody revenge for his girlfriend's murder, and saved the world along the way. After that, what do you do for an encore? You take a lousy job tracking down monsters for money. It's a depressing gig, but it pays for your beer and cigarettes. But in L.A., things can always get worse.
Like when Lucifer comes to town to supervise his movie biography and drafts Stark as his bodyguard. Sandman Slim has to swim with the human and inhuman sharks of L.A.'s underground power elite. That's before the murders start. And before he runs into the Czech porn star who isn't quite what she seems. Even before all those murdered people start coming back from the dead and join a zombie army that will change our world and Stark's forever.
Death bites. Life is worse. All things considered, Hell's not looking so bad.
Shared from Amazon.com
I PURCHASED A SIGNED/INSCRIBED COPY FOR MY HUSBAND.

This is the second time around for this read and again I found details I missed first go around.

This book is an action packed thrill ride. This book pretty leaves off where the first one ended and you find out more about Kinski. Lucifer makes an appearance in this book and I found myself rooting for him at times. Sometimes evil isn't all it appears to be.

If you like zombies, there are plenty of references to them here with different names and personalities. I love stories with zombies in it and their appearance in the book doesn't disappoint, if anything it intrigues me more. There is a lot of fighting and killing in this book but that just makes the book harder to put down as it drags you right into the action and makes you feel like you are right in there fighting with them. I can't wait to dig into the 3rd installment and find out more about Stark and his motley band of friends.

5 Fairies for the kick ass action sequences, zombie references and for making me think of evil in a different perspective.

http://www.richardkadrey.com/
Posted by Unknown at 4:36 PM