Since I'm the queen of multi-tasking, I have about 3 books on my plate right now that I'm reading. One for pleasure and two for review:) I say pleasure because I don't have to review that one...the Cirque Du Freak series was one my husband and daughter got me started on because we watched the movie "The Vampire's Assistant". All books are pleasure to me but I do have a different mindset when I read my review books. I have to look at it with my editors eye whilst enjoying it. It means I have to think when I read it instead of going with the flow:) And I really don't mind.

ALL BLURBS ARE FROM GOODREADS.COM

by Darren Shan
In the fourth book of the bestselling Cirque Du Freak series, Darren Shan and Mr. Crepsley embark on a dangerous trek to the very heart of the vampire world. But they face more than the cold on Vampire Mountain-the vampaneze have been there before them.
Will a meeting with the Vampire Princes restore Darren's human side, or turn him further toward the darkness? Only one thing is certain-Darren's initiation into the vampire clan is more deadly than he can ever have imagined.
REVIEW BOOK 1
Divine Interventation
by Cheryl Kaye Tardif 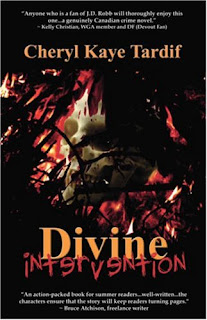 CFBI agent Jasmine McLellan is assigned a hot case—one that requires the psychic abilities of the PSI Division, a secret government agency located in the secluded town of Divine, BC.
Jasi leads a psychically gifted team in the hunt for a serial arsonist—a murderer who has already taken the lives of three innocent people. Unleashing her gift as a Pyro-Psychic, Jasi is compelled toward smoldering ashes and enters the killer's mind. A mind bent on destruction and revenge.
Jasi's team, consisting of Psychometric Empath and profiler, Ben Roberts, and Victim Empath, Natassia Prushenko, is led down a twisting path of dark, painful secrets. Brandon Walsh, the handsome, smooth-talking Chief of Arson Investigations joins them in a manhunt that takes them across British Columbia—from Vancouver to Kelowna, Penticton and Victoria.
While impatiently sifting through the clues that were left behind, Jasi and her team realize that there is more to the third victim than meets the eye. Perhaps not all of the victims were that innocent. The hunt intensifies when they learn that someone they know is next on the arsonist's list.
The case heats to the boiling point as Jasi steps out of the flames…and into the fire. And in the heat of early summer, Agent Jasi McLellan discovers that a murderer lies in wait…much closer than she imagined.
REVIEW BOOK 2
Suburban Weird
By J.R. LaGreca 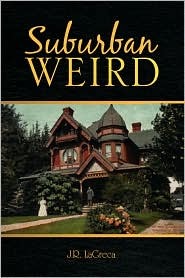 Suburban Weird is a riveting saga of lies, lust, love and betrayal. Courtney appears to have it all -- a loving lawyer for a husband, her mother-in-law's extraordinary estate for them to live in while saving for a house. Her bliss becomes overshadowed when her husband's older brother lures her into a whirlwind of desire and deception. Witness the haunting tale of how one woman becomes a pawn in a game of seduction.
Set in scenic Bay Shore, Long Island, Suburban Weird follows the exploits of Courtney Gold, a forty-year-old beauty. Courtney becomes apprehensive when her future mother-in-law, Edith Stein, turns out to be the eccentric woman her Aunt Bessie warned her about in the past.
In spite of this troubling connection, Courtney marries her fiancé, criminal attorney, Seth, only to become dangerously drawn to his adopted brother, fertility specialist, Dr. Aaron Stein. Aaron flirts mercilessly with Courtney, while constantly belittling Seth, the black sheep and baby of the family.
Things become precarious when Courtney and Seth, move into Edith's nine-bedroom mansion, and Aaron and his Russian mail-order bride, Natasha Krilova, twenty-seven years his junior, move in as well. The gorgeous, teenage virgin adds spice to this bizarre blend. The situation escalates when Aaron treats Courtney for her difficulty in conceiving.
Is Aaron a complete professional like Seth vows him to be? How does Courtney handle her improper desires? Is Edith as insidious as her Aunt Bessie suspected? Will this madness come to an end? Read the book to find out Courtney's destiny.
After the success of her first novel, Afternoon Tea, J. R. LaGreca pens another exhilarating tale about a woman's desire and the lure of erotic temptation - this time set in modern times. Some of the most outrageous events in life do happen to the family in this unforgettable tale, and the weird weaved by J.R. LaGreca. A fascinating saga, Suburban Weird is a contemporary masterpiece filled with intrigue.
====================================================================
TELL ME WHAT'S ON YOUR BOOK PLATE RIGHT NOW AND IF YOU ARE A REVIEWER DO YOU HAVE A DIFFERENT MINDSET WHEN YOU READ YOUR REVIEW BOOKS???
Thanks for reading,
Heather Powers
Posted by Unknown at 9:51 PM