Today, I’m pleased to turn my blog over to S.F. Chapman, author of Ripple in Space Time, for a wonderful guest post. Sit back and enjoy a beverage from bar. 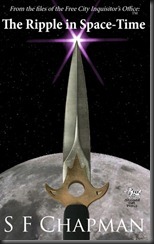 One of the big perks of being a freelance writer is that I generally work at home. Since I often have nervous bursts of creative energy in the middle of the night, I don’t have to dash across town to an office to channel it into something useful. I wrote much of my latest novel The Ripple in Space-Time at 3 in the morning on the big blue sofa in my living room.

I’m not confined to a fixed schedule either. This means that I have free slivers of time during the day to tend to other matters.

In the last few months I’ve taken to driving my elderly parents to various doctors appointments and social functions. Both have significant medical problems that make traveling difficult. I call my excursions with them “SF’s Car Service.”

My mom sits in the front seat while I drive. She’s a wonderful storyteller and often shares tales of her 81 years of funny moments, adventures and mishaps.

She recently told me of her family’s ill-conceived effort during World War II to raise rabbits for food in the backyard of their suburban house. Meat was scarce then and a few industrious neighbors were tending to chickens and ducks to makeup for the shortages.

So my grandfather got a hold of a few bunnies and the family set to work with raising them. Unfortunately my mother, who was then an especially empathic eleven-year-old, fell in love with the cuddly little fur balls. They all had names and elaborate back stories few months later when it came time to slaughter them. With big sad eyes my mother conceived my grandfather to spare the rabbits.

They had no meat but they had plenty of cute pets for the rest of the war.

My ancient parents aren’t the only people who use SF’s Car Service. My lively and gregarious teenage daughter is a regular rider as well.

She’s an excellent student and admirable athlete making her way through high school. She is also a very good storyteller.

When she was 5, she recently admitted, she boosted herself up onto the kitchen counter like a tiny superhero, wriggled past the stove and stretched precariously sideways to get to the topmost cabinet. There she retrieved a big bag of flour. The little rascal then secretly set to work making muffins for the family. The problem was that she had no idea of how to accomplish her culinary goal. The final results were sticky burned misshaped lumps and a pint-sized flour-covered superhero.

I’ve particularly enjoyed this recent storytelling in the eons-old verbal tradition and it all takes place in SF’s Car Service and Storymobile.

S F Chapman has done it all. He spent 4 years as a truck driver, 8 years as a scientific glass blower and 20 years as a building contractor. He’s a computer geek, handyman, music lover and relentless tinkerer.
But he is most excited about his latest endeavor. In the next five years, Chapman plans to release 12 books. His first, I’m here to help, launched on July 1, 2012. His next release is the science fiction detective tale The Ripple in Space-Time due out on February 1, 2013.
Born in Berkeley, Chapman is a California boy for life. He grew up on the Pacific coast and has spent the last 54 years in the San Francisco Bay Area.
He’s the third of twelve children, born to an endearing stay-at-home mother and traveling salesman father during the 1960s Space Race.
While working on his liberal arts degree at Diablo Valley College, Chapman chose mostly classes in the English Department, focusing on science fiction literature, composition and short story writing. He generated nearly a dozen short stories in two years and considers that period to be the beginning of his writing career.
S F's six works so far are the post-apocalyptic soft science fiction MAC Series consisting of Floyd 5.136, Xea in the Library and Beyond the Habitable Limit; the science fiction detective story entitled The Ripple in Space-Time, the literary novella I’m here to help and the general fiction tale of death and destruction called On the Back of the Beast. He is currently alternating between two entirely different writing projects; the first is a rough and tumble literary novel about homelessness called The Missive In The Margins and the second is a science fiction detective squeal to The Ripple in Space-Time dubbed Torn From On High.
He is the proud papa of a 19-year-old son and 16-year-old daughter.
S F's huge gray male tabby cat keeps him company while he writes and was the inspiration for Striped Cat Press.

FIND SF CHAPMAN ON THE WEB