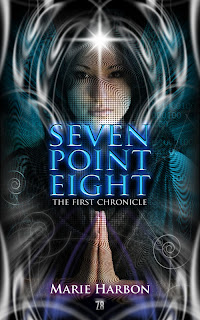 Seven Point Eight: The most powerful number in the universe. The number that connects everything. A physicist begins a quest to measure the soul but soon finds himself drawn into the world of the enigmatic Max Richardson, where research is sold to the military at the highest bid. However, he soon discovers another purpose when an extremely talented young psychic enters his life. He devises a project and builds a team to stretch the frontiers of exploration, only to make a reality-shattering discovery… The First Chronicle is the beginning of a 5 part epic which follows the spiritual and emotional journey of five people; their quest to understand the universe and our place within it. Along the way, they address the fundamental questions we all seek answers to: why are we here? What is the purpose of the universe? Is there a God? Quantum physics meets spirituality in a tale which begins in the 1940s, unfolds during the 1960s; an era of social and spiritual transformation and reaches its conclusion in the modern age. It interweaves the human dramas of love, betrayal, bitterness and above all, courage in a world where everyone must face their own dark shadow.
This book was given to me by the author for review.
My thoughts:
Let me say I became totally immersed in this story and read it in two days. Metaphysics and science blended masterfully to create visually stunning imagery. Science and metaphysics run parallel in this book and makes you question your beliefs. Sometimes, intellectual books just put me off but this book was nothing like I had envisioned as I started reading it. Egyptian gods and goddesses appear in this book as well as other theological figures. Shamanism was introduced in this book and I found myself mesmerized. Shamanism is a subject that is near and dear to me and I liked how it was brought across in this book. There is also romance and passion for the romantic readers.
If you are seeker of metaphysical knowledge but still have a bit of skepticism, this is the book for you.
I give this book 5 fairies and anxiously await the next installments of the series for the visual tapestry and the ability to make me test my boundaries of thinking.